It's in the 50s. As in, degrees. If it weren't the middle of February I'd be planning the season's first dig!
Happy sunshine, everyone. Enjoy it while you can and when it gets this nice legitimately we can get out there and beautify some plots.
Peace
Diana
Posted by diana may at 9:12 AM No comments:

So if you're reading this in the middle of winter, perhaps you are just longing for a little more sunshine and a little more green instead of white.
Just wanted to drop a quick line and remind everyone that after the long winter comes spring and with spring comes sun and flowers and yes, guerrilla gardening. Even on my winter bike rides I am scouting out some great new places for future digs.
I can't wait to see everyone in T-shirts and mud in just a few short months.
Peace
Diana
Posted by diana may at 10:06 PM No comments:

well another dig down.
last week, stephen, danielle, rob and myself teamed up to beautify a small section of Grand Ave.
it went by super fast... we were all present and accounted for by just after 10pm. We laid out the flowers (we had 9 hardy mums) and got to work. We decided we couldn't do much about the weedy/rocky landscape the planter boxes were in, so we just did the insides. That's what matters in the long run, though :)
A few mosquito bites and water bottle later we were finished! We cleared up the tools and went our separate ways.
Hopefully Esperanza Community Center and all the passerbys notice and appreciate their new flowers.
Thanks for the encouragement and help 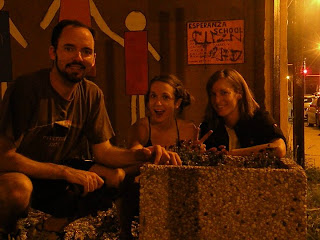 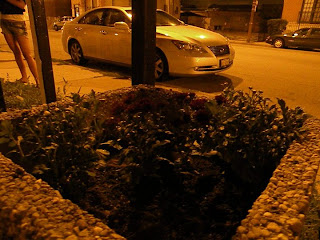 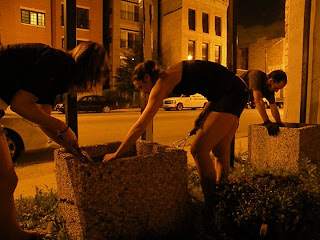 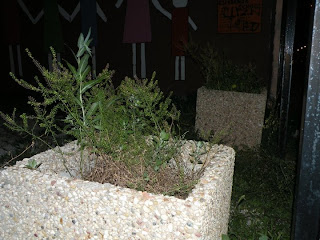 hey fellow gardeners
1. a HUGE thank you to everyone who came out last night for the dig. it was the best one yet and I couldn't have done it without you guys.
2. I hope many of you have gotten a chance to see all the news stories that aired today about the dig! If you didn't, you can check out my facebook group for a complete listing of the news stories. Here's a sample story. Overall the stations did a great job with the story. To clarify, though, I am not a nonprofit organization. I have no tax exempt status. I am simply a woman in chicago who organizes people. anyone can do it!
3. i haven't uploaded the pictures yet, so I will post a complete overview of last night's dig when i go through the photos!
happy digging
diana
Posted by diana may at 9:59 PM No comments:

donate to the cause!

first dig of the season! 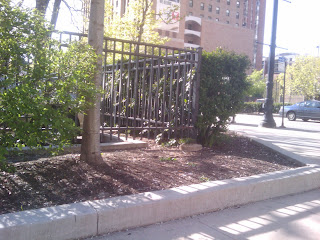 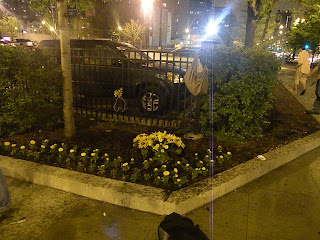 chicago participated in International Sunflower Guerilla Gardening Day 2010!
Since we do our digs at night, I planned the dig for Friday, April 30th so that first thing saturday morning would be sunflowers. I scouted out a site earlier in the week and decided on the intersection of Chicago & State. It's not exactly an under-represented part of the city, but I wanted it to be in a highly visible place and it's less than a block away from a really great nonprofit, Access Living. And as you can see f
rom the pictures, the place could use a little extra love.
One predicament: Sunflowers are not really sprouting this time of year. Did not think of this in advance. INSTEAD I bought a bunch of flowers that LOOKED like sunflowers (marigolds) and bought some fake sunflowers to put in the ground. Also: sunflower seeds.
On Friday I had definitely overbooked myself. I had to get up at 5:00am to teach yoga. Then I taught t
wo more classes and assisted in a 2-hour inversion workshop. AFTER ALL OF THAT I went down to the spot to see who was going to show up. A really great mix of people showed up: John, who heard about Guerrilla Gardening at the Food and Farm Expo, my boyfriend Stephen and a few of his friends Grace and Bryce. Old timer and good friend Pam came out, too! She brought the most beautiful Marigolds to plant! 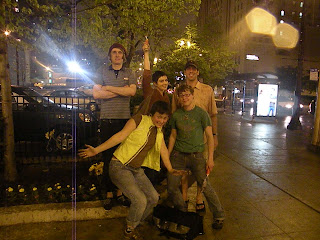 There was a looking hurricane coming the entire night and so we were extra efficient. Lots of people stopped us to ask what we were doing-- this was definitely the most visible spot to date. It turned out beautiful and we literally took the last group shot about 10 seconds before a downpour.
overall: great time, good peeps and some serious beautification
Posted by diana may at 2:59 PM No comments: 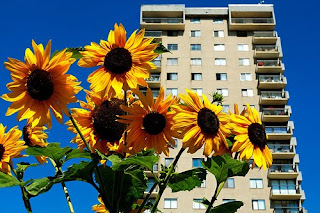 gardener alert!
May 1st is International Sunflower Day.
Guerrilla Gardeners around the world (you didn't think we were the only ones, did you??) will be planting sunflowers in their neighborhoods.
Since my digs are always at night (what can I say.. I like the ninja-like aspect of planting at night and the instant gratification of waking up to something new and beautiful) I am planning on doing a dig April 30th so that the flowers will be alive and kickin' for their special day.
Location TBD
Sunflowers WELCOME! If you can come, please try to bring a sunflower or two! the more the better. As always, I will provide whatever is in my budget, but half the fun is doing it together.
I'll keep you posted
Posted by diana may at 8:19 PM No comments: