last night was fun.
i was exhausted and it was rainy all day, but the invites were already set out, so i was committed.

at 10pm my two lovely roommates (jenny and amanda) along with my friend chris (happy belated, bro!) went down to grand and rockwell right at smith park. the Chicago Tribune asked in advance to follow me on this dig to write a story-- so keep an eye out for the sunday special feature article in early august!

i had 35 flowers, two trowels, a small rake, a screwdriver and a pair of gardening gloves. ms. moriah showed up and it's a good thing she did because she is the fastest digger i've ever encountered. i think it's because she grew up on a farm.

anyway, the job was quick. we beautified the entrance to the park next to what looked like the restrooms, but apparently they are not restrooms. an old building of some sort. they had bushes, but no flowers and there is a park right by and a picnic table, so hopefully people will notice the difference.

a special thanks and shout out to my fabulous sister nicole who generously donated 20 dollars for the dig! she's in san francisco, so she can't help out in the sense of digging, but she wanted to help so she mailed me some funds. greatly appreciated

here are some pictures, though the after picture doesn't really do it justice: 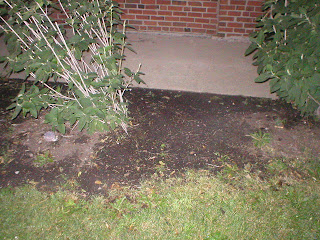 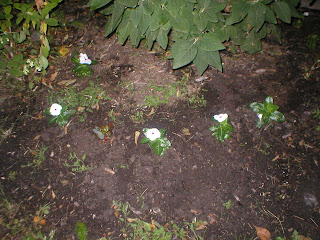